It’s the same old story as Asian markets open in risk-on mode. Commodity currencies strengthen broadly, but led by New Zealand Dollar this time. On the other hand, Swiss Franc, Yen and Dollar are the weaker ones, while Euro and Sterling are mixed. Trading could be subdued today with a thin economic calendar. ECB President Christine Lagarde would speak but she’s unlikely to say something different from what she said last week. Though, German Ifo business climate might trigger some reactions.

According to preliminary data, Australia’s export of goods rose 16% mom to AUD 34.9B. Imports of goods dropped -9% mom to AUD 26.0B. There was a goods trade surplus of AUD 9.0B.

“Imports have fallen following a November spike to be more in line with recent history”, said ABS Head of International Statistics, Katie Hutt, “while exports of metalliferous ores and cereals are the strongest in history, resulting in the fourth highest goods trade surplus on record”.

AUD/NZD in correction downwards, but no change in bullish trend

However, firm break of 1.0678 would bring deeper fall to 61.8% retracement at 1.0577. Overall, the depth of the correction could eventually determine how far the rise from 1.0415 would extend to. 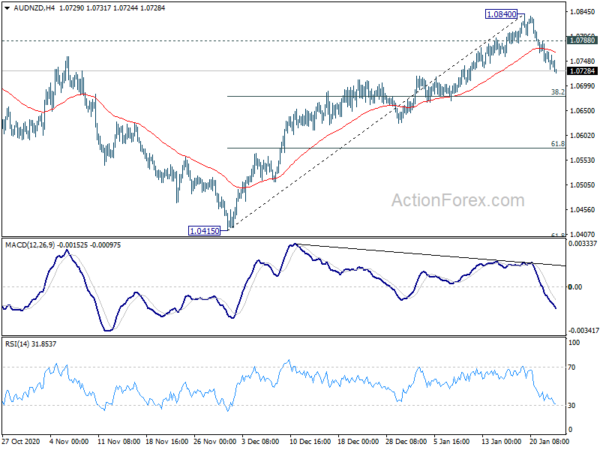 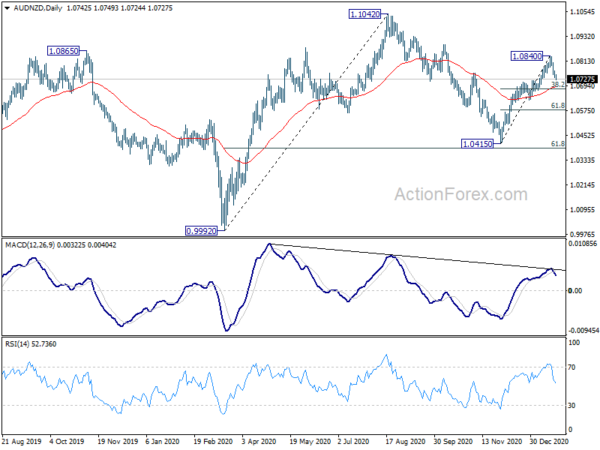 The Week ahead: Fed to stand pat with wait-and-see approach

FOMC is widely expected to stand pat this week and adopt a wait-and-see approach. Overall tone regarding economic outlook should remain cautious for the short term and upbeat for the medium term, depending on vaccine roll-outs and the impact on coronavirus infections. While Chair Jerome Powell would be pressed on topics like tapering, he would most certainly remain non-committal to any plan of scaling back the asset purchases. After, Fed is clear to allow moderate inflation overshoot ahead to make up for the persistent misses. There is no sign of achieving that yet. On the central bank front, BoJ will release minutes and summary of opinions.

On the data front, we’d maintain that forward looking and sentiment indicators are the more important ones. Those include US consumer confidence, Germany Ifo business climates, Swiss KOF economic barometer and Australia NAB business confidence. Meanwhile, GDP from US, France and Canada will also be released. Here are some highlights for the week: 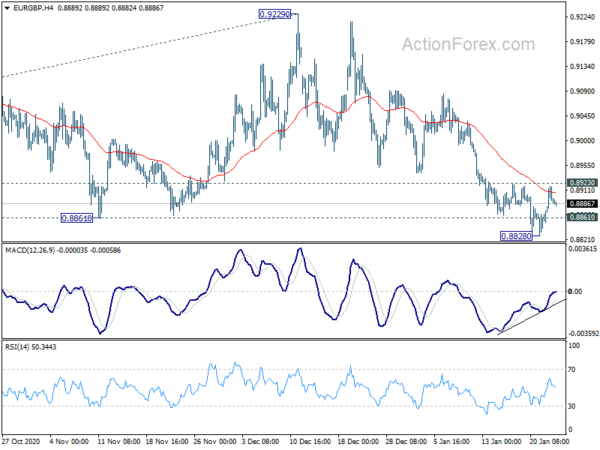 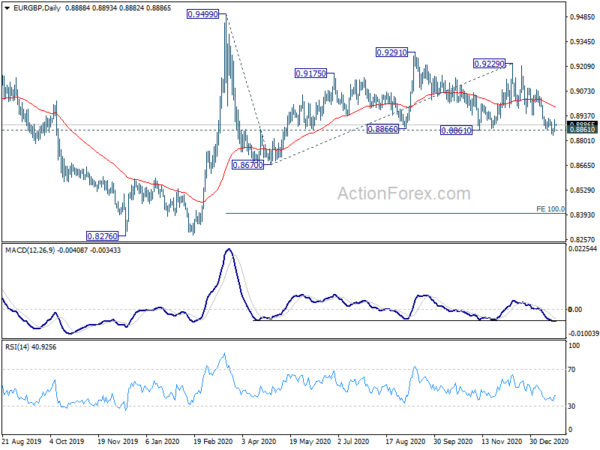