Dollar is back under some selling pressure, starting in European session, and intensifies after poor job data. Weakness in the greenback is dragging down Canadian Dollar as the second worst performing, while Yen follows as third. Sterling is once again leading the way higher, followed by Aussie and Kiwi. Euro and Swiss France are mixed, as ECB minutes provides nothing special to traders.

Technically, GBP/USD’s break of 1.3951 confirms rally resumption for 1.4376 long term resistance level. GBP/JPY is also set to take on 147.95 key structural resistance. GBP/AUD is a focus for the rest of the week, on the race of top performer. The support from 55 day EMA so far is favoring the Pound. Break of 1.8020 resistance will resume the rebound from 1.7412 towards 1.8523 resistance next. 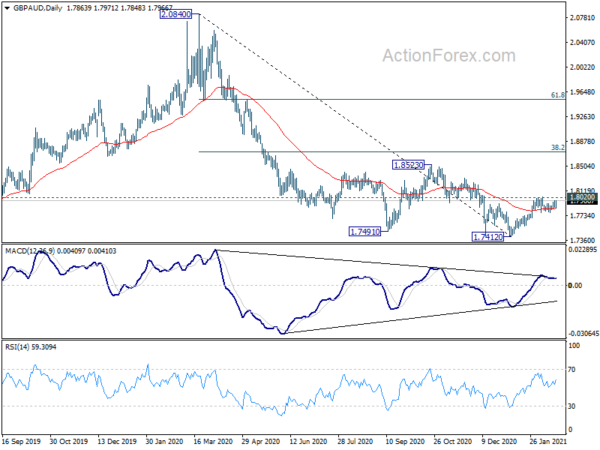 US initial jobless claims rose to 861k, above expectations

ECB accounts: Policy should keep a steady hand and give recalibration time to take effect

Accounts of ECB’s January 20-21 monetary policy meeting noted “members agreed that ample monetary stimulus remained essential to preserve favourable financing conditions over the pandemic period.” Very accommodative stance was “necessary to counter the downward impact of the pandemic on the projected path of inflation”. Favourable financing conditions needed to “prevail for some time”.

“Overall, it was widely felt that the recalibration of instruments decided on in December remained appropriate and well-balanced… Monetary policy should keep a steady hand and that the measures that were put in place in December should be given time to take full effect.”

Nevertheless, “members also widely agreed that there was no room for complacency and that the Governing Council had to continue to stand ready and use all of its instruments, as appropriate, to ensure a robust convergence of inflation towards its aim.”

BoE MPC member Michael Saunders said the “elevated unemployment” is a sign that UK still has “too much spare capacity” and that would “push inflation below target”. That could cause a “slow, incomplete recovery”. Additionally, there are risks of “household caution overspending”, and “fears of unemployment”.

Saunders added, “I will continue to put high weight on labour market data in judging whether spare capacity in the economy has been used up, and hence whether we are on track to return inflation sustainably to target in line with our remit.”

BoJ Governor Haruhiko Kuroda told reporters today that Japan’s exports have recovered to levels before COVID-19 struck. Output was making similar moves while consumption was picking up as a whole. However, services spending remains weak.

Kuroda also Prime Minister Yoshihide Suga today, and “explained how the global economy was picking up, and how the BOJ needed to conduct the review to continue its ultra-loose monetary policy.” He said that Suga didn’t comment on the review, and there was no discussion regarding the Tokyo Olympic games.

GBP/USD’s up trend resumes after brief consolidation and hits as high as 1.3977 so far. Intraday bias is back on the upside. Current rise from 1.1409 should target 1.4376 long term resistance next. On the downside, break of 1.3828 support will indicate short term topping, and bring deeper pull back instead. 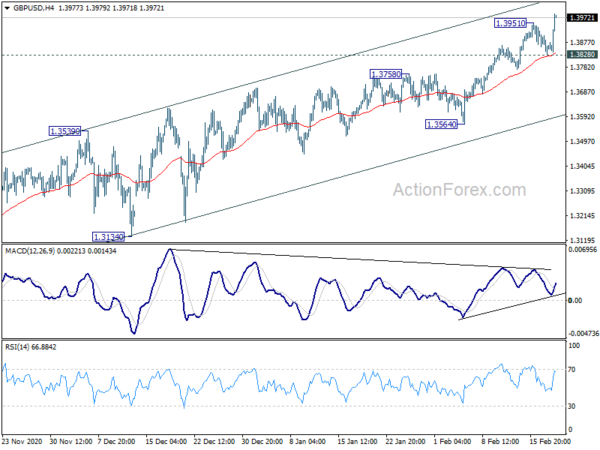 In the bigger picture, rise from 1.1409 medium term bottom is in progress. Further rally would be seen to 1.4376 resistance and above. Decisive break there will carry larger bullish implication. On the downside, break of 1.2675 support is needed to indicate completion of the rise. Otherwise, outlook will stay cautiously bullish even in case of deep pullback. 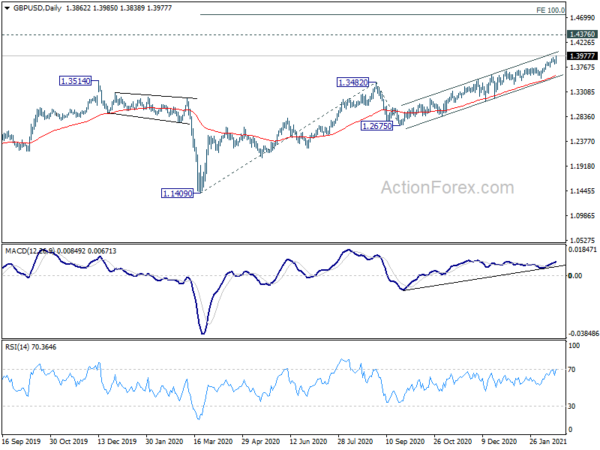