The strong rally in US treasury yield overnight pushed Dollar notably higher. The greenback is indeed the second strongest one for the week, just next to Sterling. Canadian Dollar is following closely with support by resilience in oil prices. ON the other hand, overall risk-on sentiment is keeping Yen under heavy selling pressured. Other currencies, including Swiss Franc, Aussie and Kiwi, are mixed for now.

US 10-year yield accelerated higher overnight and breached 1.3% for the first time in a year, before closing at 1.299, up 0.099. Reflation trade over the massive US stimulus package, together with loose Fed policy was a factor in driving funds out of treasuries. Also, there is increasing optimism of returning to normal with the pace of vaccine rollout, domestically and globally.

TNX’s solid break of 1.266 resistance is an important bullish development. Upside momentum is also accelerating with the medium term channel resistance taken out, with a gap up. The strong support from 55 week EMA is also a medium term bullish sign.

RBA Kent: Aussie could be 5% higher without RBA policy

RBA Assistant Governor Christopher Kent said in a speech that some factors have contributed to the appreciation of the Australian Dollar since November. The factors include “general improvement in the outlook for global growth” and a “marked increase in many commodity prices”.

Iron ore prices “has increased by around 40 per cent” since early November. And, “historical relationships with commodity prices would have implied a much larger appreciation of the Australian dollar than what’s actually occurred,” he added.

“While history only provides a rough guide, this difference suggests that the Bank’s policy measures have contributed to the Australian dollar being as much as 5 per cent lower than otherwise (in trade-weighted terms),” Kent said.

Australia leading index rose to 4.48% in Jan, points to above trend growth in 2021

Australia Westpac leading index rose from 4.24% to 4.48% in January. The data points to “above trend growth in the Australian economy through 2021”. Westpac expects 4% GDP growth in 2021, led by consumer spending, which contributes to around 3% to the overall growth rate.

As for RBA policy, Westpac expects the bond buying program to be extended beyond October. Yield curve control will be maintained through 2021. However, the Term Funding Facility will be “largely scaled back” after June. 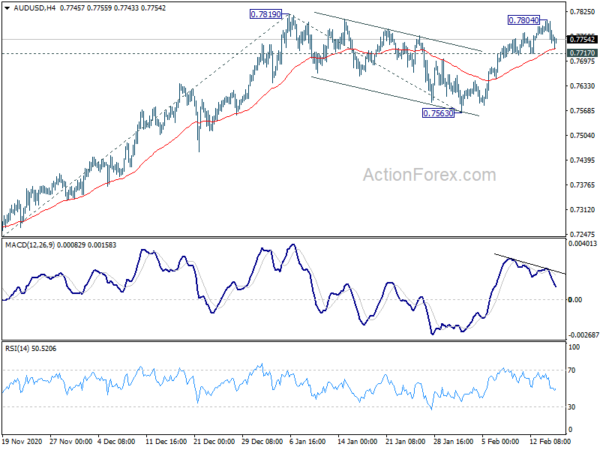 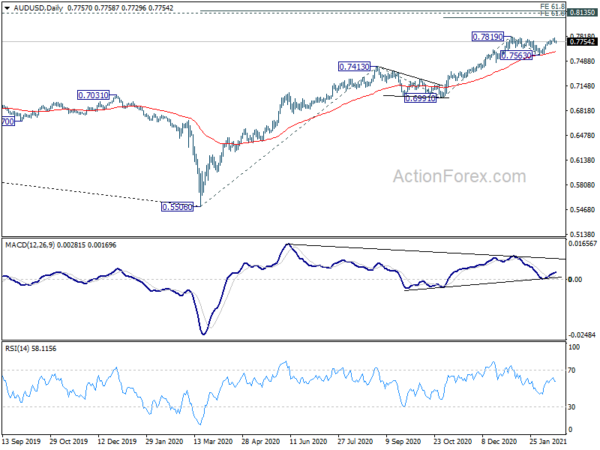 Euro Weak With Dollar in as Stock Surge Further, Looks into German ZEW

Another baby formula shipment from Europe to arrive in the U.S. on Wednesday