Dollar remains firm after some Fed officials’ upbeat talks about the second half but buying appears to be slowing slightly in Asian session. Gold is also setting in range for now, reflecting some hesitation to push the greenback further higher. Yen and commodity currencies turned mixed, together with the stock markets. While US stocks closed lower overnight, they’re just in normal consolidations after last week’s strong rally.

Fed Barkin: You’re looking at a very strong second half

Richmond Fed President Thomas Barkin said in a CNBC interview, “you’re looking at a second half that is going to be very strong “. But the question is “how do we get through where we are today to that second half,” he added. “While it might be bumpy, I think there are backstops here, and in particular, fiscal would be a backstop, I think elevated savings are a backstop.”

Barkin “couldn’t tell” the day when Fed starts to scale back monetary stimulus, as it gave “outcome guidance not data guidance”. But ” this notion of ‘substantial further progress’ is the right way to think about it,” he said. “So there are scenarios certainly where we see strong recovery in unemployment and inflation but there are lots of scenarios where we don’t.”

Kaplan: Fed should have earnest discussion on tapering later this year

Dallas Fed President Robert Kaplan emphasized “we should be as aggressive as we can be while we are in the teeth of this pandemic, until we are convinced that we have weathered this pandemic.”

Though, “later this year, my own view is, we should at least be having an earnest discussion about when it’s appropriate to taper” the asset purchase program.

He expects the US economy to grow around 5% this year, with unemployment rate falling back to 4.50-4.75% from current level of 6.7%. The economy will then have made “substantial progress” towards Fed’s dual mandate.

By the time, “I think it’s a healthier for the U.S. economy and for markets to wean off these extraordinary actions and this extraordinary stimulus,” he said.

Atlanta Fed Bostic: The economy could come back a bit stronger than expected

Atlanta Federal Reserve President Raphael Bostic said, “all of the economic fallout has been a function of how we’ve responded to the public health crisis… Making a forecast about this year is really at its heart a forecast of how well the vaccine is going to penetrate into the population so we’re at a place where we don’t have to be so cautious about how we do our economic activity.”

Though, he added, “there is some possibility that the economy could come back a bit stronger than some are expecting… If that happens, I’m prepared to support pulling back and recalibrating a bit of our accommodation and then considering moving the policy rate.”

BoE MPC member Silvana Tenreyro said in a speech that the work on feasibility of negative rates is “still in progress”. Once the bank is satisfied that negative rates are feasible, the MPC would have a “separate decision over whether they are the optimal tool to use to meet the inflation target given circumstances at the time”. She also laid out three points regarding her current thinking on how negative rates might work in the UK.

Firstly, “the ‘financial-market channels’ of monetary policy transmission have worked effectively under negative rates in other countries, with some of the evidence pointing to more powerful effects.” Secondly, “‘bank-lending channels’ of monetary policy transmission have also been effective at boosting lending and activity,” and there is “no clear evidence that negative rates have reduced bank profits overall”. Thirdly, negative rates “could only make bank-lending channels slightly less powerful than otherwise”.

Intraday bias in USD/JPY remains on the upside with focus on channel resistance, (now at 104.38). Sustained break there will argue that the down trend from 111.71 has finally completed. Stronger rise would be seen to 105.67 resistance for confirmation. Nevertheless, rejection by the channel resistance will maintain bearishness. Break of 103.59 minor support will turn bias back to the downside for retesting 102.58 low. 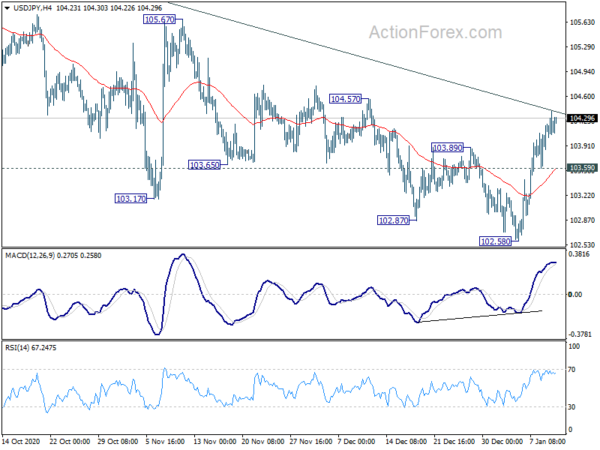 In the bigger picture, USD/JPY is still staying in long term falling channel that started back in 118.65 (Dec. 2016). Hence, there is no clear indication of trend reversal yet. The down trend could still extend through 101.18 low. On the upside, break of 105.67 resistance is needed to be the first signal of medium term reversal. Otherwise, outlook will remain bearish. 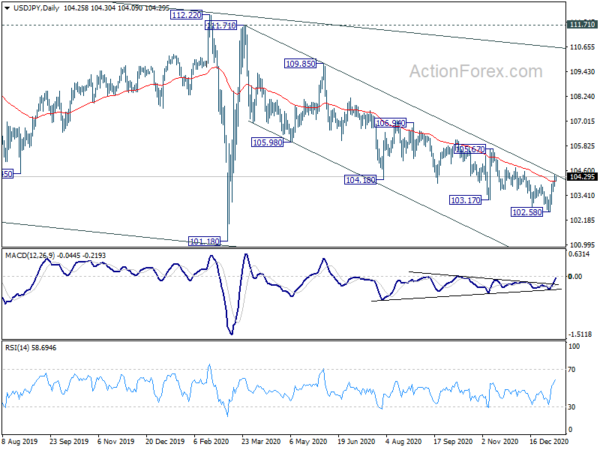