Selloff in the Dollar was the main theme in the currency markets last week. With the arrival of coronavirus vaccines, the global economy looks set to return to normal next year, despite some cautious comments from central bankers. Yen might look worst than Dollar but it is indeed still holding above near term support against most major currencies. Canadian Dollar was the strongest one as boosted by upside breakout in oil prices, as well as solid job data. Euro and Swiss Franc closely followed as next strongest, while Sterling was not too far away. Australian and New Zealand Dollar ended mixed, with Aussie weighed down by rising tensions with China.

Recent decline in the greenback was accompanied by steady rally in treasury yields, and strength in Asian markets in general. While some funds flowed into US stocks to fuel the record runs, at least part of them should have flowed into Asia. As Dollar index’s down trend resumed, there is prospect of some near term recovery near 90 handle. But that’s subject to a retreat in risk appetite, and as Gold is rejected by 1850 resistance. On the other hand, China’s Shanghai SSE poses some upside risk to Asian stocks, which could in turn draws more funds out of the US, thus triggers deeper selloff in the greenback.

Dollar index to take on 90 handle after downside breakout

Dollar index finally resumed the medium term down trend from 102.99 last week and hit as low as 90.47. While daily MACD shows sign of downside acceleration, RSI indicates that DXY is already is deep oversold condition. There is prospect of some support 90 psychological level, which coincide with 61.8% projection of 102.99 to 91.74 from 94.30 at 90.00.

That is, DXY might turn into near term consolidation soon to close the year. But even in case of rebound, we’re not expecting a firm break of 91.74 support turned resistance. On the other hand, sustained break of 90 could prompt further downside acceleration through 88.25 (2018 low) to 61.8% projection of 87.34.

DOW losing some momentum but SSE set for upside breakout

One possible pre-condition for rebound in Dollar would be pull back in record running stocks. DOW is now in proximity to 38.2% projection of 18213.65 to 29919.35 from 26143.77 at 30340.30. The index is losing some upside momentum as seen in 4 hour MACD. Failure to sustain above 30000 handle could bring some retreat back to 29231.20 support. Though, even in that case, near term bullish will be retained as long as this support holds. Further, firm break of 30340.30 could prompt upside acceleration in stocks which would be accompanied by downside acceleration in Dollar index.

An upside risk for global equities is from China’s Shanghai SSE index. Breach of 3458.79 resistance argues that the rally from 2646.80 might be ready to resume. More importantly, SSE is now nearing key cluster level around 3500 again, with 38.2% retracement of 5178.19 to 2440.90 at 3486.54. Decisive break of this key resistance cluster would carry larger bullish implications which could trigger another round of stock rally in Asia, and possibly other parts of the world.

10-year yield is still continuing the steady near term up trend form 0.504. It turned out that the rise is yield is more about funds flowing out of US treasuries. Or further, combining with the weakness in Dollar, it’s more about reallocation from US markets into others, like Asia, which was reflected in the strength in some Asian currencies and stocks.

TNX would be facing the important 55 week EMA (now at 1.023), which is close to 1% handle. Some initial resistance could be seen there, which stabilize the selloff in treasuries, and thus help Dollar recovers. Yet, sustained break of this level could pave the way back towards 1.266 resistance, the spike high during the initial moves of the pandemic. That could be a confirmation of Dollar weakness.

Gold edged lower to 1764.31 last week but staged a strong rebound quickly. A short term bottom should be formed there. Indeed, The correction from 2075.18 might have completed slightly earlier than expected, ahead of 55 week EMA (now at 1752.15. Immediate focus will be on 1850.50 support turned resistance. Decisive break there will affirm this bullish case and bring further rise through 55 day EMA to 1855.50 resistance. That would be a double-confirmation of Dollar’s selloff.

On the other hand, rejection by 1850.50 would keep the correction from 2075.18 alive, for another low below 1764.31 before completion. That would, in turn, be a double confirmation of a recovery in Dollar index as noted above. 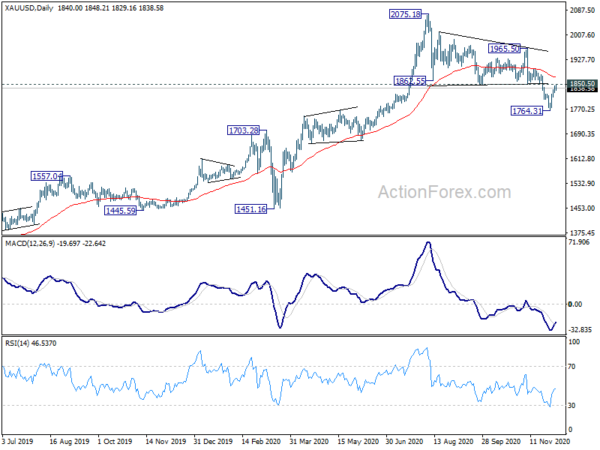 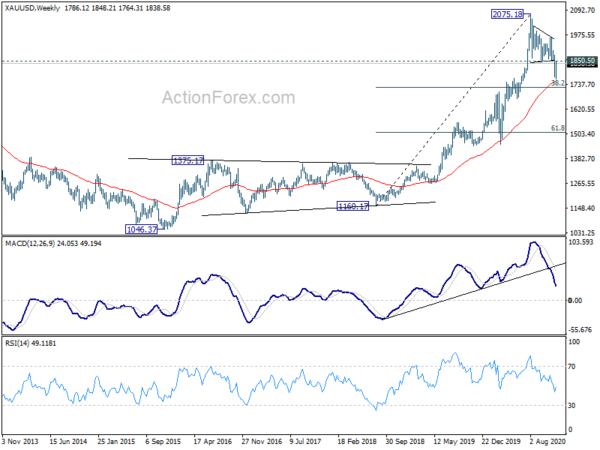 EUR/JPY rose further to as high as 126.68 last week, but lost momentum ahead of 127.07 key resistance. Initial bias is neutral this week first. But further rally is expected as long as 125.13 resistance turned support holds. On the upside, decisive break of 127.07 will resume whole rise from 114.42. Next target will be 128.67 medium term fibonacci level. On the downside, however, break of 125.13 resistance turned support will turn bias to the downside, to extend the consolidation from 127.07 with another falling leg. 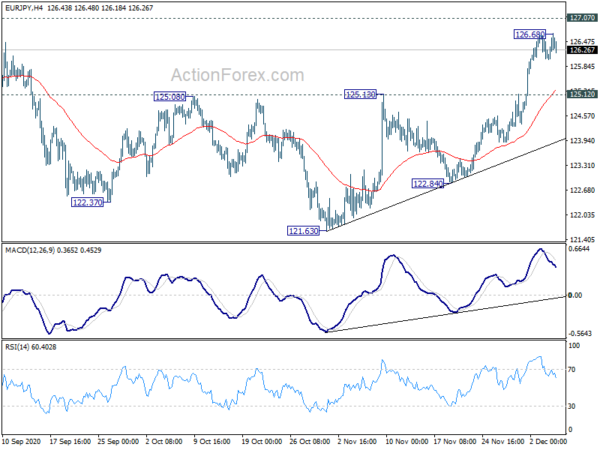 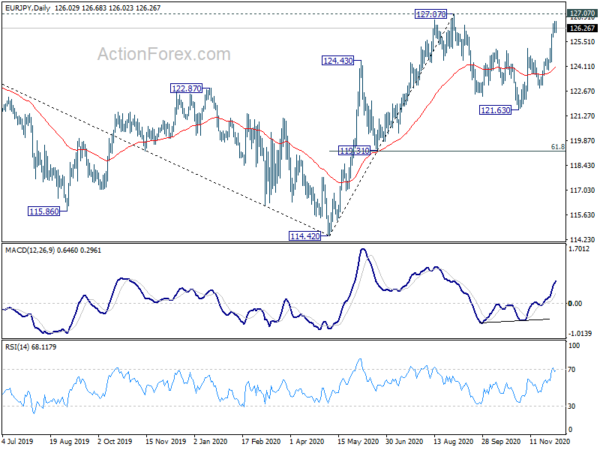 In the long term picture, EUR/JPY is staying in long term sideway pattern, established since 2000. Another rising leg could have started for 137.49 resistance and above. 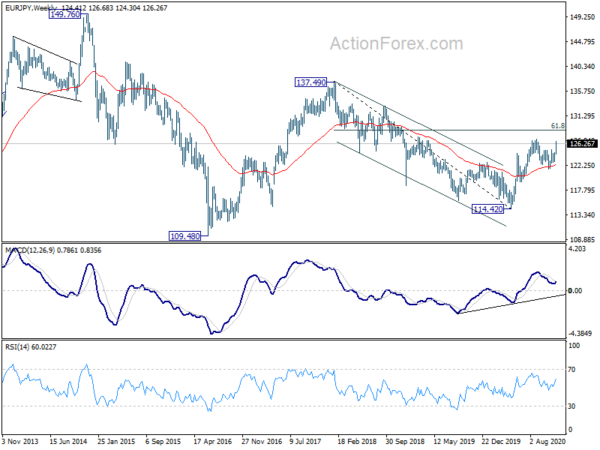 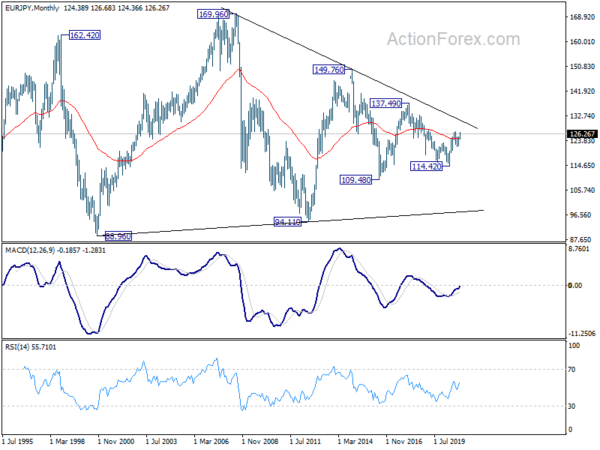 Yen Down on Surging US Yields, Europeans Stay Strong