Dollar recovers broadly today as markets turn into consolidative mode. The greenback pars back some of f the previous selloffs. but remains the worst performing one for the week. Canadian Dollar and Swiss Franc follow as the next weakest. On the other hand, Sterling and Aussie turn a bit softer, but remain the best weekly performers. Trading could turn more subdued for the rest of the day, unless the still ongoing Brexit trade negotiations give us something new.

Technically, Yen has apparently turned weaker today and there is some prospect of more upside in Yen crosses. In particular, USD/JPY’s decline had been very unconvincing and failed to sustain below 103.71 low. A break above 126.75 resistance in EUR/JPY will be the first sign of rally resumption. GBP/JPY might take on corresponding resistance at 140.70 too. If both resistance levels are taken out, there is prospect for USD/JPY to follow higher too.

BoJ announced to extend the during of the Special Program to Support Financing in Response to the Novel Coronavirus (COVID-19) by 6 months. Other than that, monetary policy was kept unchanged. Under the yield curve control framework, short term interest rate target was held at -0.1%. 10-year JGB yield target is held at around 0%, with unlimited purchase of government bonds.

Also, BoJ will “conduct an assessment for further effective and sustainable monetary easing, with a view to supporting the economy and thereby achieving the price stability target of 2 percent”. Nevertheless, the framework of QQE with YCC has been “working well to date” and thus there is “no need to change it. The results of the review will likely be be published in March.

The central bank said Japan’s economy is “likely to follow an improving trend” with gradual waning of COVID-19 impact. But pace of improvement is expected to be “only moderate”. Year-on-year rate of core CPI is “likely to be negative for the time being”. But it’s expected to turn positive and then increase gradually.

Japan’s government upgraded fiscal 2021 (starting in April) GDP growth forecast to 4.0%, up form July estimate of 3.4%. If realized, that would be the largest expansion since data became comparable in 1995. Also, real GDP in March quarter of 2022 would be around the pre-pandemic level in December quarter of 2019.

Policymakers need to keep a close watch “on downside risks to the economy in Japan and overseas from the pandemic and impacts from moves in financial capital markets,” he added.

ANZ added, “the New Zealand economy is showing impressive resilience. After a 14% bounceback in the September quarter, the economy is the same size it was pre-COVID.” Nevertheless, “it’s not the same shape” with “some real stresses and strains, in both overheated sectors like construction, and chilled ones like tourism.” Also, “we expect a technical recession in Q4 and Q1 as the policy-fuelled bounce fades and the tourism hole hurts”.

New Zealand goods exports dropped -0.2% yoy to NZD 5.2B in November. Goods imports dropped -17% yoy in NZD 5.0B. Monthly trade balance was a surplus of NZD 252m, slightly above expectation of NZD 250m. That’s the first November surplus since 2013.

There were contrasting movements in exports to top destinations. Exports to China, US and EU were up. Exports to Australia and Japan were down. Imports were down from all top trading partners, including China, EU, Australia, US and Japan.

Intraday bias in EUR/JPY remains neutral for the moment as consolidation from 126.74 continues. Break of 126.74 will put focus on 127.07 resistance. Decisive break there will resume whole rise from 114.42. Next target will be 128.67 medium term fibonacci level. In any case, outlook will remain cautiously bullish as long as 125.13 resistance turned support holds, in case of another retreat. 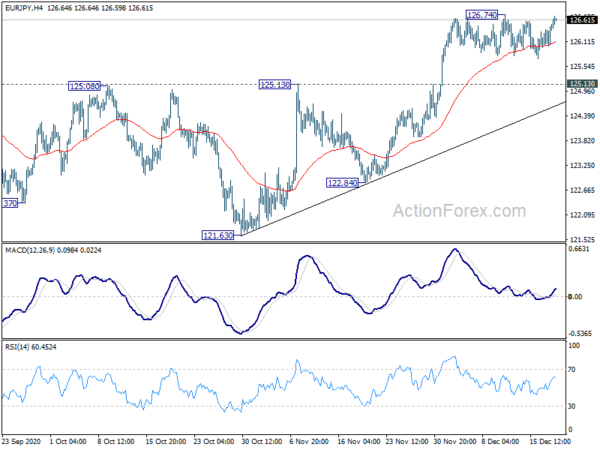 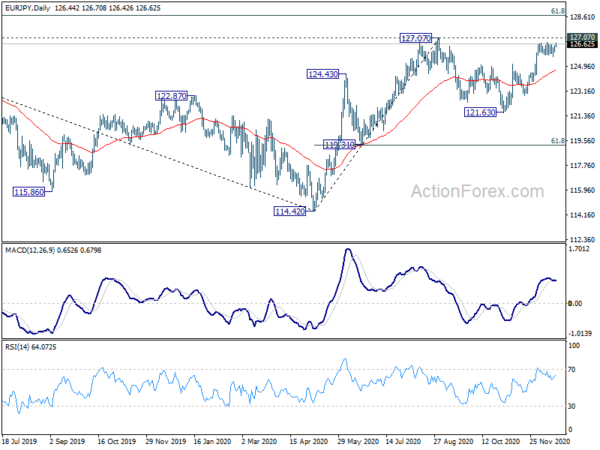 European Central Bank says bitcoin is on the ‘road to irrelevance’