Dollar’s broad based down trend resumption was a major theme last week. Though, Canadian Dollar was the worst performing one, as it digested recent oil price supported rally. Overall risk appetite, with NASDAQ extending record run, kept Yen and Swiss Franc soft too.

As Brexit trade negotiations went into an extra mile, Sterling reversed some of prior week’s losses and ended as the strongest one. Though, at the time of writing, there is no conclusion yet. Fishing right is seen as the last major roadblock, after the UK made concessions on level playing field. We’ll see if the talks would finally be wrapped up by the end of Sunday.

Dollar index’s down trend continued last week and has finally breached 90 handle to as low as 89.73. Daily MACD suggests that the index is picking up downside momentum again. Near term outlook will remain bearish as long as 91.23 resistance holds. Further fall would be seen to next key support zone, between 88.25 and 61.8% projection of 102.99 to 91.74 from 94.74 at 87.88. We’d expect strong support from there to finally bring a another sustainable rebound.

The selloff in Dollar was accompanied by rally resumption in Gold. The strong break of 55 day EMA re-affirmed the case that consolidation pattern from 2075.18 has completed with three waves down to 1764.31, just ahead of 55 week EMA. Further rally will now remain in favor as long as 1819.05 support holds. Next focus is 1965.50/2075.18 resistance zone. Strong resistance might be seen there to limit upside at first attempt, following Dollar index’s rebound from the above mentioned support zone. However, if Dollar index does break through 87.88/88.25, that will likely push Gold through 2075.18 high to resume the long term up trend. We might know in Q1. 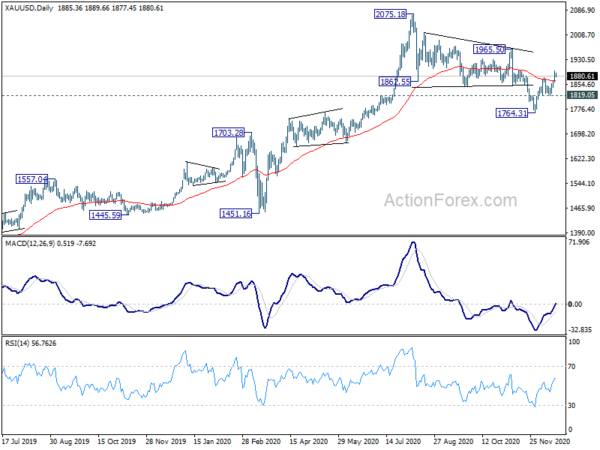 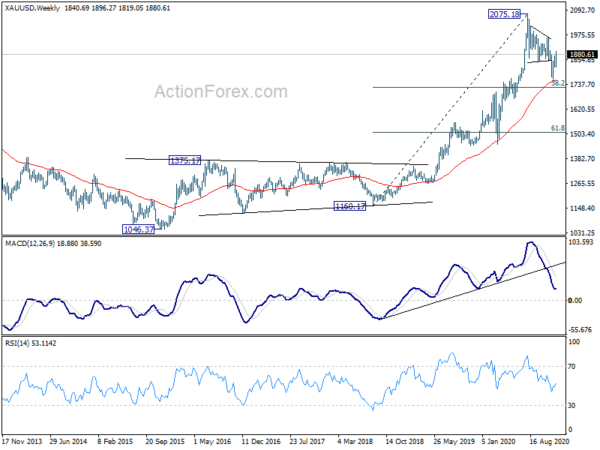 Nevertheless, the development will be heavily dependent on overall risk sentiments. DOW has been clearly losing momentum as seen in daily MACD. It also struggled to break through 38.2% projection of 18213.65 to 29119.35 from 26143.77 at 30340.30. A near term pull back could be imminent. Break of last week’s low at 29849.15 could prompt a correction to 55 day EMA (now at 29121.88, before traders come back from holiday next yet. If that happens, Dollar could have a near term relief rebound first, before another selloff comes.

Brexit trade talk results to provide some volatility ahead

For the holiday shortened week, the result of Brexit trade talks – a deal, no deal, or another extra mile – would be the major source of volatility. Sterling pairs have generally be stuck in recent range, awaiting the result too. As for GBP/CHF, we’d maintain that breakout from range of 1.1598/2203 is needed to confirm the next direction. Otherwise, any wild moves are just part of the consolidation pattern. 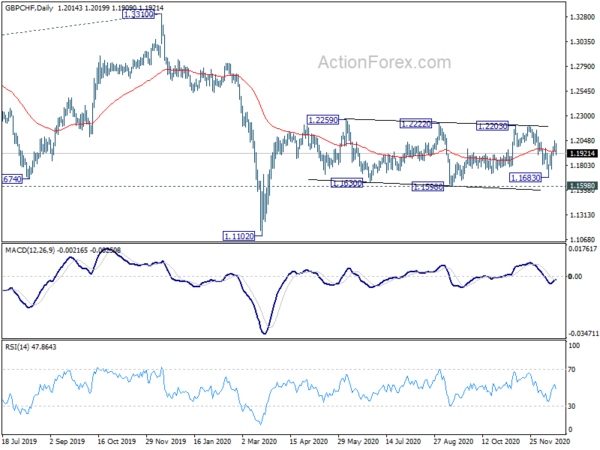 Similarly, EUR/GBP would have to break out from range of 0.8861/9291, to confirm the next direction. These two pairs will remain the focuses to decide the reactions to the trade negotiations. 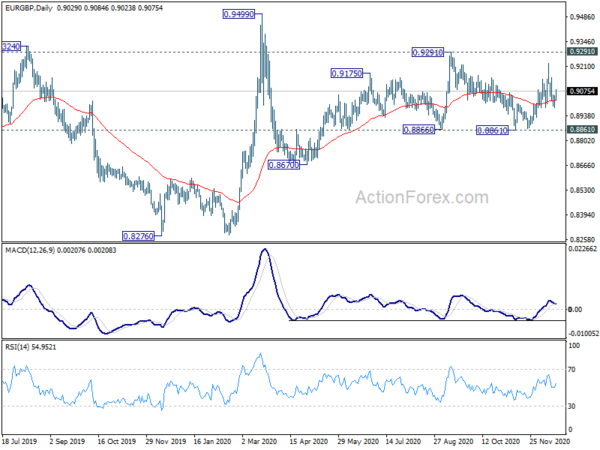 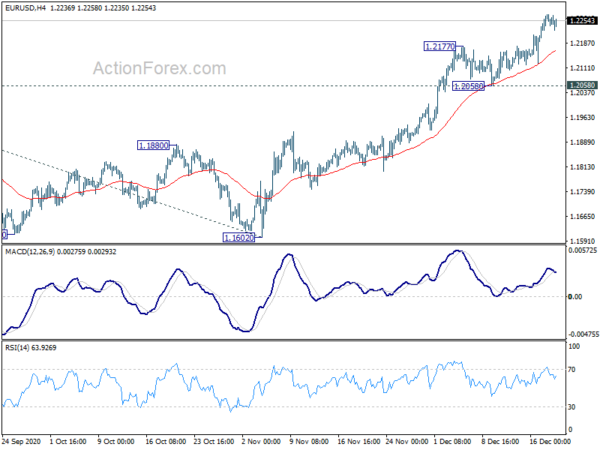 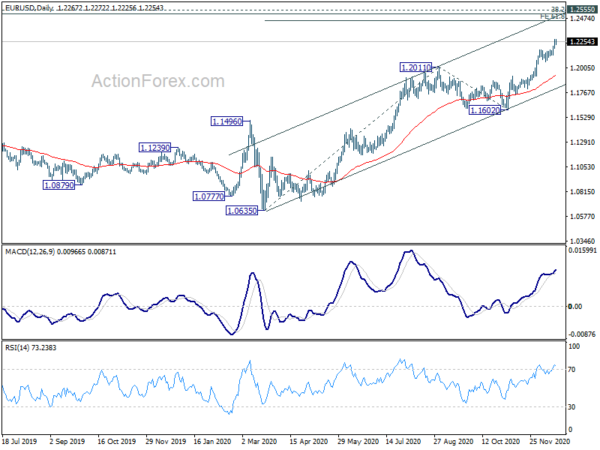 In the long term picture, the case of long term bullish reversal continues to build up, with bullish convergence condition in monthly MACD, sustained trading above 55 month EMA and long trend falling trend line. Focus is now on 1.2555 cluster resistance (38.2% retracement of 1.6039 to 1.0339 at 1.2516 ). Decisive break there will confirm and target 61.8% retracement at 1.3862 and above. 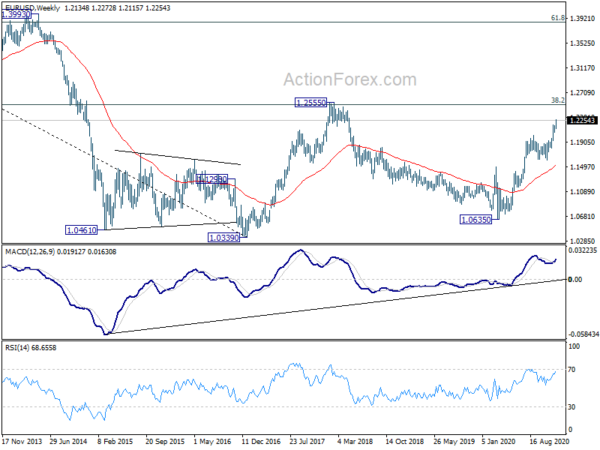 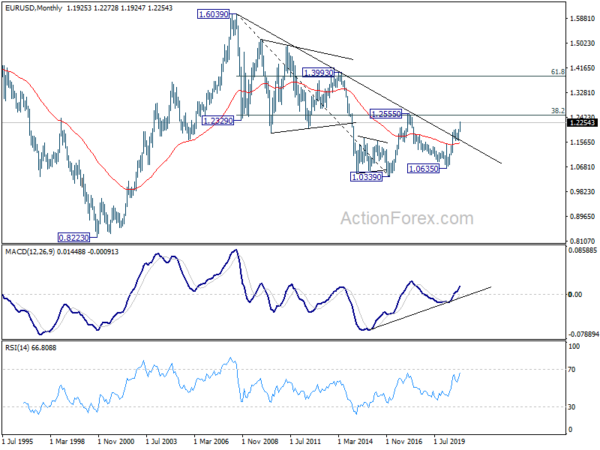 The latest Covid variant is 1.5 times more contagious than omicron and already in half of U.S. states