Asian markets are generally mixed despite some solid data from Japan, China and New Zealand. Yen is lifted mildly by the relatively optimistic economic outlook. Sterling is also slightly firmer after UK Foreign Minister Dominic Raab indicated Brexit negotiations are “down to really two basic issues” only. Dollar, Canadian and Euro are the weaker ones. Nevertheless, major movement is found in Gold, which finally dives through 1800 handle.

Technically, focus will remain on whether Dollar would finally drop through key near term support levels, including 1.2011 resistance in EUR/USD, 0.7413 resistance in AUD/USD, and 1.2928 support in USD/CAD. Also, eyes will be on the next move in Sterling in response to Brexit talk progress, with focuses on 0.9004 resistance in EUR/GBP and 1.1989 support in GBP/CHF. 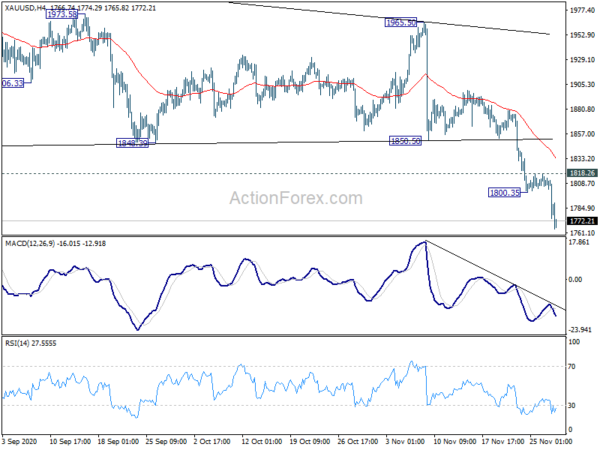 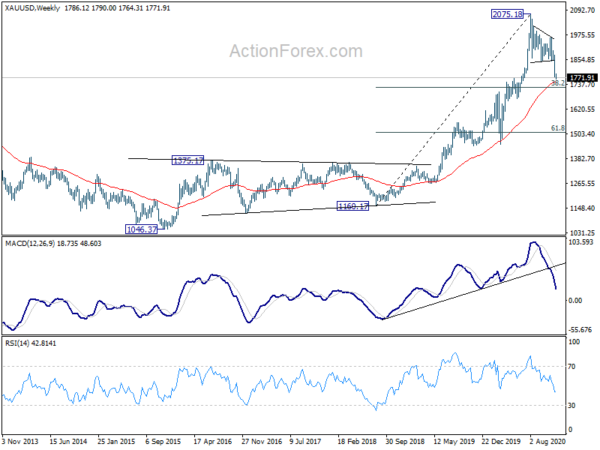 Japan industrial production rose 3.8% mom in October, well above expectation of 2.3% mom, and not much slower than September’s 3.9% mom. It’s also the fifth straight month of increase. The Ministry of Economy, Trade and Industry also said manufacturers expected growth to continue with another 2.7% mom in November, but a decline of -2.4% mom in December.

According the Zhao Qinghe, the bureau’s senior statistician. Four factors grove manufacturing activity. Both supply and demand of Chinese manufactured goods continued to improve. Imports and exports steadily recovered. Prices of both raw materials and output rose. Prospect of manufacturers of all sizes also improved.

ANZ noted: “Monetary and fiscal policy have undoubtedly done their jobs this year. But it’s worth remembering that both work by bringing forward spending from the future. There’s no free lunch, and they need to be used judiciously. The true underlying momentum of the economy should become clearer over the next few months as the impact of one-offs fade, but the case for further life-support measures is becoming less clear by the day. And that’s certainly something to celebrate.”

It’s an extremely busy week ahead on the data front. Important data to watch include US ISMs and employment, Eurozone CPI, Canada GDP and employment; Australia GDP; China PMIs etc. RBA rate decision and Fed Beige Book are unlikely to trigger much reactions, though. Here are some highlights for the week:

Intraday bias in AUD/USD remains on the upside for 0.7413 high. Decisive break there will resume whole rebound from 0.5506 and target 0.7635 long term fibonacci level. On the downside, however, break of 0.7265 support will extend the consolidation from 0.7413 with another falling leg. Intraday bias will be turned back to the downside for 0.6991 support instead. 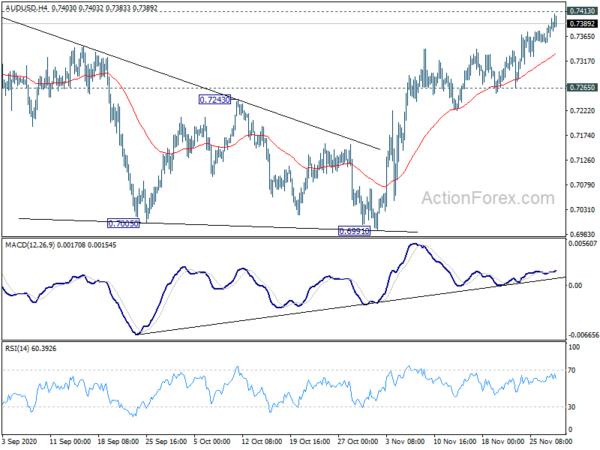 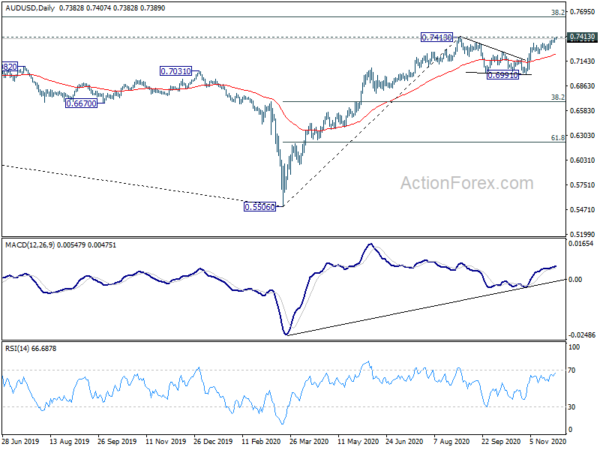