Dollar and Yen are back under some selling pressure today, as markets seem to be returning to risk-on mode. NASDAQ hit another record high overnight, and Asian markets are generally trading in black. The greenback’s weakness is also seen as it’s vulnerable to breaking a key psychological level against the Chinese Yuan. Australian and New Zealand Dollar are the relatively stronger ones. Canadian Dollar is mixed, awaiting BoC. Sterling is also mixed, awaiting Brexit trade talks developments.

Technically, Gold appears to be losing some momentum but further rise is expected as long as 1821.96 support holds. At the same time, this week’s recovery in Dollar has been clearly weak so far. Such recovers could end any time soon. Break of 1.2177 temporary top in EUR/USD, and 0.8875 temporary low in USD/CHF could be the first signals of selloff resumption in Dollar. Such moves could be accompanied by break of 1875.27 temporary top in Gold. 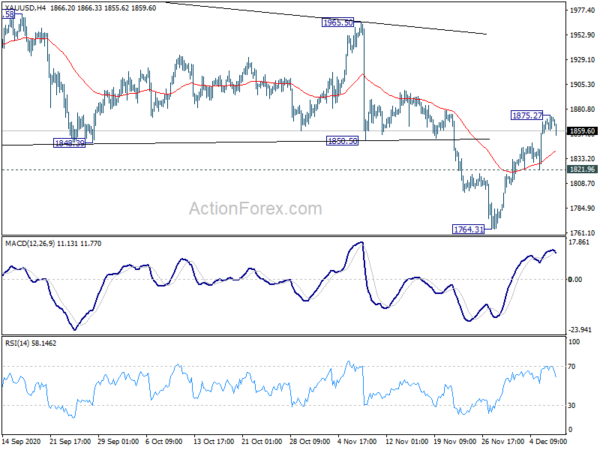 The data affirmed the improving trend in capital expenditure. Investments could be further boosted ahead by the government’s Fresh JPY 40T stimulus. Yet, the volatile series is up for revision while the exporters might continue to struggle to gain momentum due to global weakness.

China’s CPI dropped -0.5% yoy in November, well below expectation of 0.0% yoy. That’s also the first annual decline in more than a decade since October 2009. Though, it’s driven by one off factor as pork supply improved from the disruption African swine fever. At the same time, demand remained solid despite Wuhan coronavirus outbreak. PPI decline slowed to -1.5% yoy, versus expectation of -1.8% yoy.

Offshore Chinese Yuan’s up trend against dollar resumes today, with USD/CNH now pressing 6.5 handle. Near term outlook stays bearish as long as 6.5968 resistance holds. Next target is 61.8% retracement of 6.0153 (2014 low) to 7.1953 at 6.4661. Strong support is expected from there to bring a sustainable rebound, based on pure technical perspective.

Though, recent decline in USD/CNH is seen as more as an indication of general weakness in Dollar against Asian majors. Sustained break of 6.4661 could signal acceleration in the flows, which might spread to selling in the greenback elsewhere. 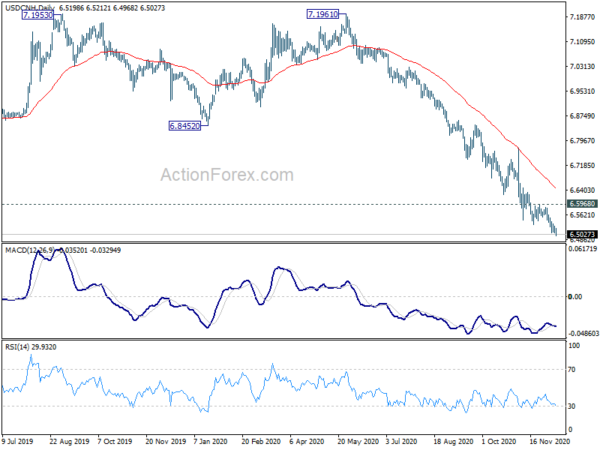 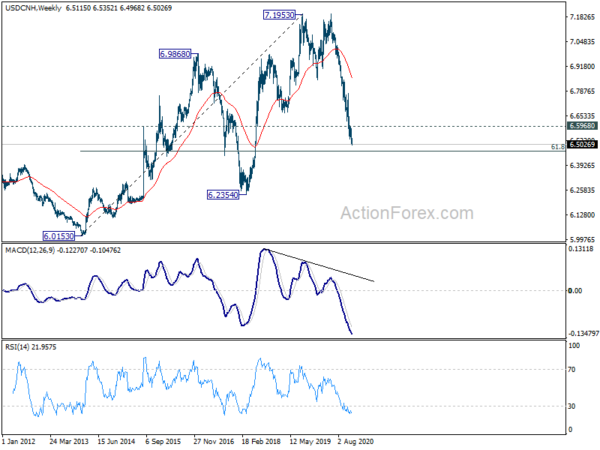 Australia Westpac Consumer Sentiment rose 4.1% to 112 in December, up from 107.7. It’s now 48% above the trough in April, and hit the strongest level since October 2010. Westpac said, “after only eight months the evidence seems clear that sentiment has fully recovered from the COVID recession.”

Westpac expects RBA to lower its unemployment forecast a raise growth forecasts at its February meeting. Also, “markets will be watching the RBA’s approach to its yield curve control policy. By 2022, if the near term forecast is for the unemployment rate to be returning to near pre COVID levels, it will be difficult to justify forward guidance that the cash rate will remain on hold for a further three years.”

New Zealand manufacturing sales rose 3.1% yoy in Q3 in volume terms. Eight of the 13 manufacturing industries had higher sales volumes comparing to a year ago. “In June these industries were heavily impacted by COVID-19, however, in September, levels have rebounded and are in fact higher than any other September quarter on record,” business insights manager Sue Chapman said. “This could be due to a rise in demand and more stability in these industries.”

BoC monetary policy decision is a major focus for today. After the adjustment in asset purchases in October, we expect BOC to keep the powder dry. Policymakers will caution about the rising number of coronavirus cases and economic impacts of tighter restrictive measures, while noting positive news about vaccine. The central bank will reiterate that accommodative monetary policies should remain in place as slack capacity will only be fully absorbed by 2023.

Canadian Dollar has been one of the stronger ones this month, with help from rally in oil prices. Any hawkish twist in today’s BoC statement could prompt further rise in the Loonie. CAD/JPY is pressing an important resistance zone of 81.42/81.91 for the moment after recent rally. Further rise is expected as long as 80.42 support holds. Decisive break of 81.91 will resume whole rebound from 73.80. 61.8% projection of 73.80 to 81.91 from 77.91 at 82.92 will be next near term target. 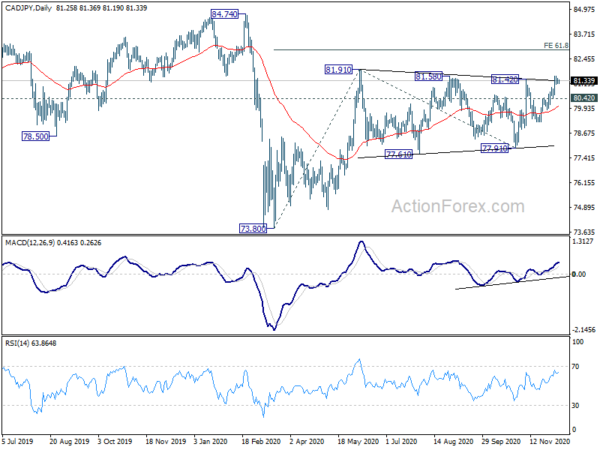 Germany trade balance, US wholesale inventories and oil inventories are featured today. But main focus will be on BoC rate decision. 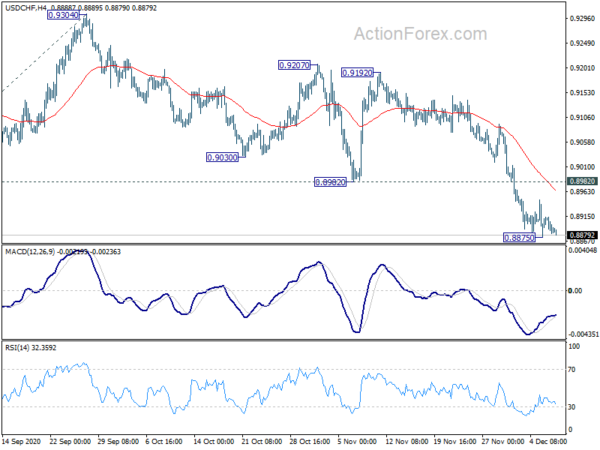 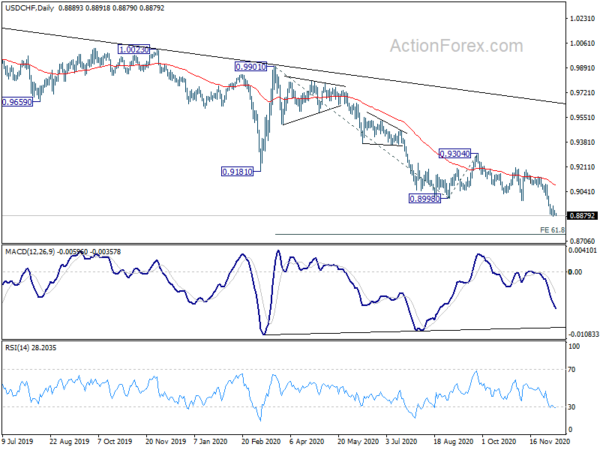