Sterling’s selloff accelerates further today after leaders from both EU and UK admitted that their negotiations positions are still part. No-deal Brexit is now seen as the most likely scenario, and we should know very soon by the end of Sunday. Dollar and Yen recover mildly today, on mild risk-off mode ahead of the weekend. Yet, both safe currencies remain the worst performing ones for today. Australian Dollar is paring back some initial gains, but it remains the strongest one for the week, with strong boost by upside acceleration in iron ore prices.

UK Prime Minister Boris Johnson told reporters today that there are “two key things” stuck in the Brexit trade negotiations with the EU. The UK is now “very very likely ” to come out of the EU “on World Trade terms”, i.e., no-deal Brexit.

“There are two key things where we just can’t seem to make progress and that’s this kind of ratchet clause they’ve got in to keep the UK locked in to whatever they want to do in terms of legislation, which obviously doesn’t work,” Johnson said. “And then there is the whole issue of fish where we’ve got to be able to take back control of our waters.”

“It is looking very, very likely that we will have to go for a solution that I think would be wonderful for the UK, and we’d be able to do exactly what we want from January 1 – it obviously would be different from what we’d set out to achieve but I have no doubt this country can get ready and, as I say, come out on World Trade terms,” he added.

European Commission President Ursula von der Leyen said after the EU summit “positions remain apart on fundamental issues” in the the post-Brexit trade negotiations with the UK. They would decide on Sunday “whether we have conditions for an agreement, or not”. But, “one way or the other, in less than three weeks, it will be new beginnings for old friends”.

She insisted that EU’s proposals would not undermine UK’s sovereignty. On the level playing field, “this is not to say that we would require the UK to follow us every time we decide to raise our level of ambition, for example, in the environmental field,” she added. “They would remain free – sovereign if you wish – to decide what they want to do. We would simply adapt the conditions for access to our market accordingly the decision of the United Kingdom, and this would apply vice versa.”

ECB Governing Council member Vitas Vasiliauskas said he has reservation about the new easing package, which could provide too much extra stimulus for the economy. Though, he considered the decision good and positive yesterday. He added, “my position was that we need to shoot selectively rather than with a machine gun, without care.”

Another Governing Council member Robert Holzman said the PEPP limit “can be used up but the expectation is that it will not be fully used.”. He emphasized, “PEPP limit is a backstop, we do not want to pump more into the market than necessary.”

ECB Villeroy: Aim of PEPP is not to invest a certain amount each month

ECB Governing Council member Francois Villeroy de Galhau told BFM Business radio the aim of the Pandemic Emergency Purchase Programme (PEPP) was not “to invest a certain amount each month, but rather a result”. “We will do less if the financing conditions remain favorable like today. If the opposite is needed, we will do more,” he said.

ECB announced yesterday to raise the envelop of the PEPP by EUR 500B, and extend the program by 9 months through March 2022.

Villeroy also reiterated that “we do not have an exchange rate target … but we have a strong vigilance about the effects of the exchange rate on inflation. We are ready as a result of this vigilance to use all our instruments.”

Bundesbank: Exports to be a solid pillar of German economic recovery

Germany’s Bundesbank said in report that economy recovery is “likely to be interrupted for the time being as the coronavirus pandemic “flared up again in autumn”. Though, a “similarly severe impairment” as in Spring is “not to be expected.

“Due to the economic upturn in key partner countries, German exports should be a solid pillar of the economic recovery,” Bundesbank added.

BusinessNZ’s executive director for manufacturing Catherine Beard said, “overall, the sector is shaping up to end 2020 on a positive note, which would be a considerable contrast to what was seen during the first half of the year.”

BNZ Senior Economist, Doug Steel said that “as a measure of change, the PMI suggests that the manufacturing sector continues to move in the right direction after getting hit hard earlier in the year by COVID related restrictions.”

Intraday bias in GBP/USD remains on the downside at this point. Sustained break of 55 day EMA (now at 1.3181) should confirm another rejection by 1.3514 key resistance. Deeper decline would be seen back to 1.2675 support next. On the upside, above 1.3324 minor resistance will turn intraday bias neutral first. 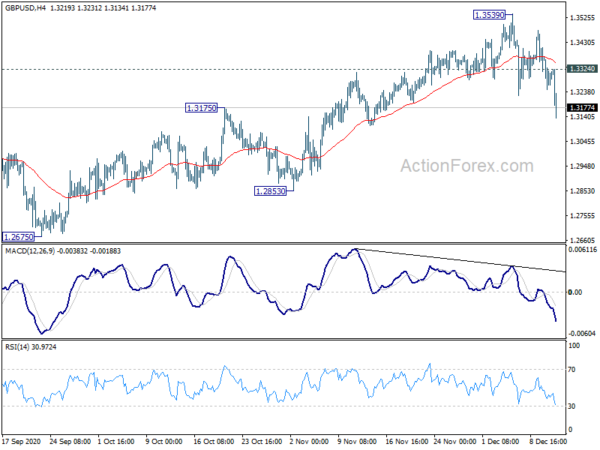 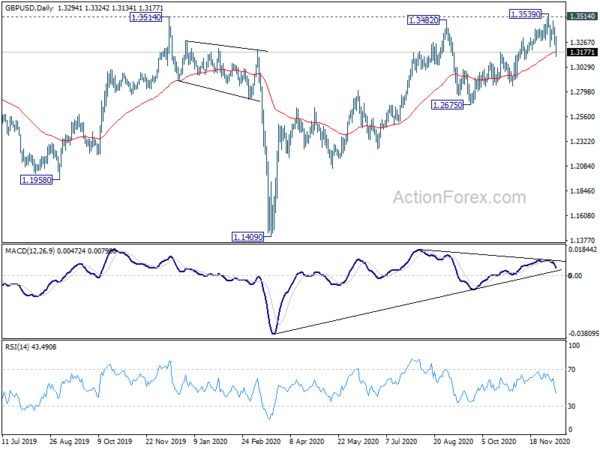 Sterling Gaps Up as Brexit Talks Go an Extra Mile, But Upside Capped