Sterling is heavily sold off today as risk of no-deal Brexit is increasing with no major breakthrough in the never-ending negotiations. It’s even unsure if talks will be concluded today, or continues till Wednesday. An European Commission spokesman even refused to “speculate on a last chance date” for the negotiations. Australian Dollar is following as the second weakest as China’s blame on Australia as a possible original of the coronavirus heightens tensions further. Swiss Franc is currently the strongest one followed by Euro and Yen. Dollar is mixed for now.

Technically, GBP/CHF and EUR/CHF should be watched in the coming days on market reactions to the Brexit talks. As for GBP/CHF, break of 1.1797 support could prompt downside acceleration towards the lower end of the medium term range at 1.1598. On the other hand, firm break of 1.1079 support in EUR/CHF would extend the consolidation pattern form 1.0915 with another falling leg towards 1.0661 support. Both would mean risk aversion on the European side. 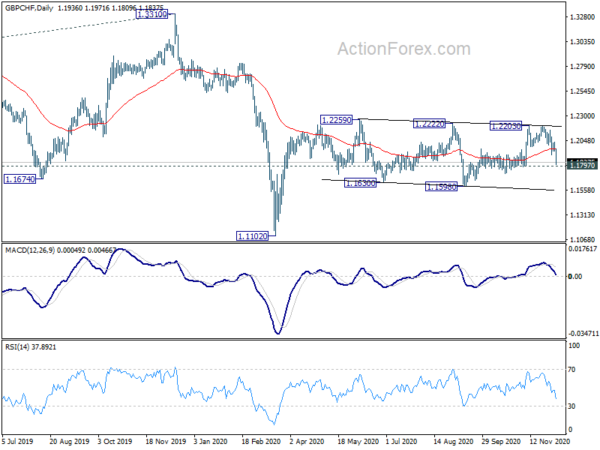 Sentix noted: “The Corona crisis year 2020 will end with a bang, which will set several exclamation marks for the global economy. In our December results, we have a series of all-time highs (!) in the expectation components of various world economic regions. Hopes for an early use of vaccines are fuelling the fantasy that the economy in 2021 will recover more clearly than previously expected from the consensus.”

However, separately released, Ifo said the industrial production expectations for the coming months have deteriorated, falling to 5.5 pts in November. “The consumer-oriented industries in particular are catching their breath, while the pharma industry is seeing a surge,” says ifo expert Klaus Wohlrabe.

Australia AiG Performance of Services Index rose 1.5 pts to 52.9 in November, highest since November 2019. Looking at some details, sales rose 5.1 pts to 54.7. Employment rose 3.3 to 56.4. But new orders dropped -1.0 to 51.9. Growth was seen in four sectors while retail trade and hospitality was the only sector that continued to contract.

GBP/JPY’s break of 138.23 support argues that corrective rise from 133.03 has completed, on bearish divergence condition in 4 hour MACD. The pattern from 142.71 might be starting another falling leg. Intraday bias is back on the downside for 137.19 support first. Firm break there will add more credence to this bearish case and target 133.03/134.40 support zone. This will remain the favored case as long as 140.70 resistance holds, in case of recovery. 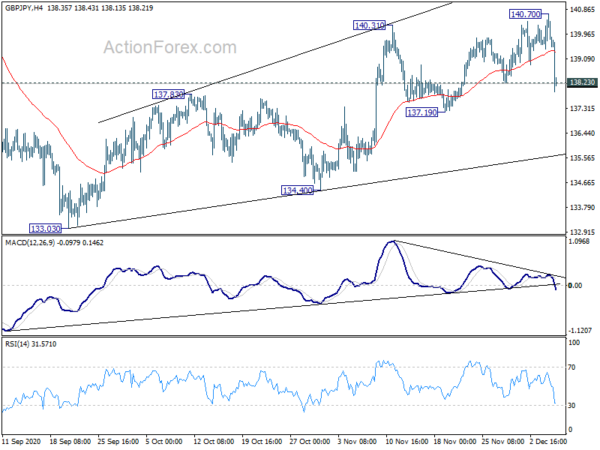 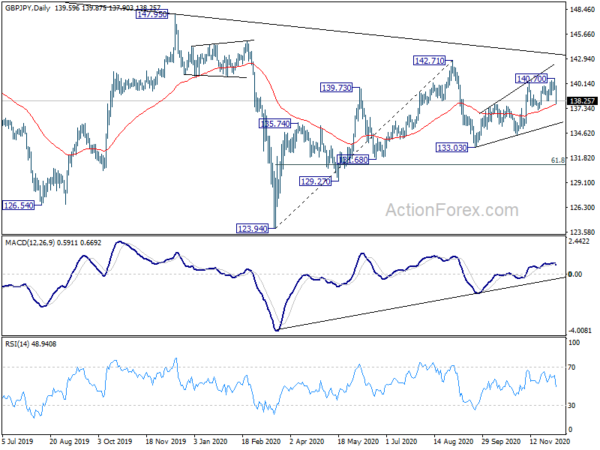