Sterling pares back some of its losses as traders refused to add to bet on no-deal Brexit for now. Though, the Pound remains generally weak in Asian session today. Markets are relatively quiet elsewhere with stocks trading in mixed mode. Treasury yields also gave back some of last week’s gains. Improvement in Australia business confidence and Japan’s fresh fiscal stimulus are unable to ignite any moves. Focus will turn to German ZEW economic sentiment first, with eyes on Brexit development and ECB later in the week.

Technically, Gold took out 1850 resistance overnight and further affirms the case of near term bullish reversal. But corresponding selloff was not seen in the greenback. EUR/USD is holding in consolidation below 1.2177 temporary top. AUD/USD and USD/CAD are both continuing to lose momentum. Focuses would be on 0.7351 minor support in AUD/USD and 1.2868 minor resistance in USD/CAD to gauge the chance of a near term recovery in Dollar.

UK Prime Minister Boris Johnson will travel to Brussels for an in-person meeting with the European commission President Ursula von der Leyen, for last ditch effort in making the Brexit trade agreement. The meeting should be held in the coming days, possible on Wednesday or Thursday. A joint announcement confirmed after both leaders talked on phone yesterday.

Nevertheless, the statement maintained that “the conditions for finalizing an agreement are not there due to the remaining significant differences on three critical issues: level playing field, governance and fisheries”.

According to BRC, UK’s year-on-year total retail sales growth slowed to 0.9% in November, down from October’s 4.9% yoy. That’s the weakest spending growth since the -5.9% fall in May. Like-for-like sales rose by 7.7% yoy, largest gain since June.

“Some retailers were able offset a proportion of lost sales through greater online and click-and-collect sales, ensuring they could still serve their customers,” Helen Dickinson, chief executive of the BRC, said.

Australia NAB business confidence rose to 12, but no improvement in employment

Australia NAB Business Confidence rose to 12 in November, up from 3. Business Conditions rose to 9, up from 2. Trading conditions improved to 17, from 7. Profitability conditions rose to 15, up from 5. Employment conditions, however, was unchanged at -5. NAB noted, “Overall both confidence and conditions are now above average, and stronger than the period right before the pandemic – albeit this partly reflects some ‘snapback’ following the containment of the virus.”

However, “the employment index did not see a further improvement and remains in negative territory. So, while activity is picking up as the economy reopens, businesses are yet to move back into hiring mode. This is not completely surprising with the labour market often lagging developments in activity – so we will keep closely watching this measure,” said Alan Oster, NAB Group Chief Economist

GBP/USD recovers notably after hitting 1.3223 and intraday bias is turned neutral first. We’re holding on to the view that a short term top was formed at 1.3539, and deeper fall is in favor. Break of 1.3223 will target 55 day EMA (now at 1.3162) first. Sustained break there will confirm another rejection by 1.3514 key resistance. Deeper fall should be seen back to 1.2675 support next. For now, risk will stay on the downside as long as 1.3539 resistance holds, in case of recovery. 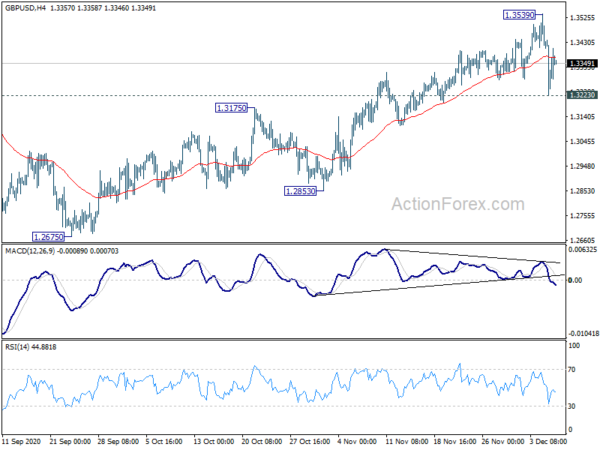 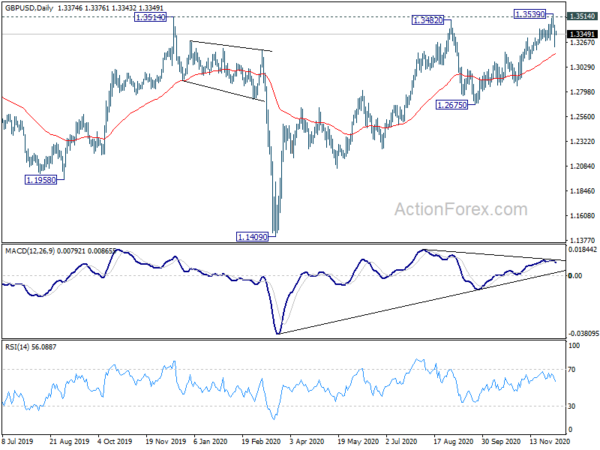 Bank of America reveals its top stocks ahead of earnings, including a favorite solar name