Sterling rebounds strongly today on hope that the physical meeting between the leaders of UK and EU would yield some positive progress on post Brexit trade talks. Yet, traders are not too committed on the bullish side yet, after Prime Minister Boris Johnson reiterated his hard-line stance. Australian Dollar is currently the stronger on , as helped by overall risk-on sentiments and solid consumer confidence data. Dollar trades some what lower, but Euro and Swiss Franc are even weaker, as pressured by respective Sterling crosses.

Technically, with BoC rate decision in sight,k 1.2768 minor support in USD/CAD is a level to look at. Break will resume recent down trend for 1.2711 projection level. Meanwhile, firm break of 81.91 resistance in CAD/JPY and 1.5447 support in EUR/CAD should seal the case for Canadian Dollar’s rally. 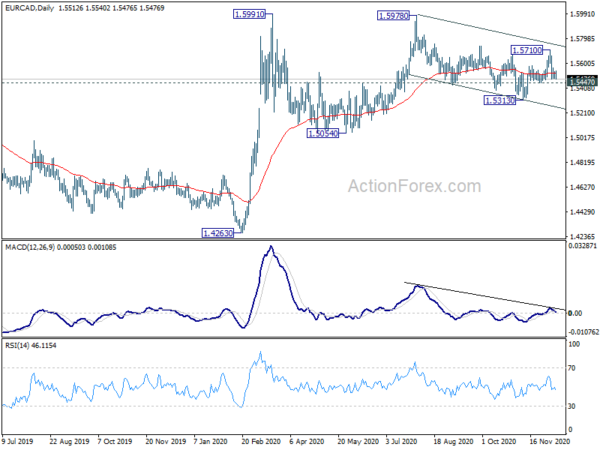 UK Prime Minister Boris Johnson indicated to the parliament that he won’t accept a deal with EU that requires the UK to move in step automatically. He told the parliament, “our friends in the EU are currently insisting that if they pass a new law in the future with which we in this country do not comply … then they want the automatic right … to punish us and to retaliate.”

“And secondly, they are saying that the UK should be the only country in the world not to have sovereign control over its fishing waters”, he added. “I don’t believe that those are terms that any prime minister of this country should accept.”

Released in European session, Germany trade surplus widened to EUR 18.2B in October, above expectation of EUR 17.0B.

China’s CPI dropped -0.5% yoy in November, well below expectation of 0.0% yoy. That’s also the first annual decline in more than a decade since October 2009. Though, it’s driven by one off factor as pork supply improved from the disruption African swine fever. At the same time, demand remained solid despite Wuhan coronavirus outbreak. PPI decline slowed to -1.5% yoy, versus expectation of -1.8% yoy.

Deflation is not a good sign to the economic outlook. It signals weakness in domestic demand, pointing to slowdown in production and subdued economic growth. In theory, monetary stimulus is needed to boost inflation. However, we do not expect PBOC to lower RRR or interest rates further as the government has shifted the focus to deleveraging and tightening of the property market.

The data affirmed the improving trend in capital expenditure. Investments could be further boosted ahead by the government’s Fresh JPY 40T stimulus. Yet, the volatile series is up for revision while the exporters might continue to struggle to gain momentum due to global weakness.

Australia Westpac Consumer Sentiment rose 4.1% to 112 in December, up from 107.7. It’s now 48% above the trough in April, and hit the strongest level since October 2010. Westpac said, “after only eight months the evidence seems clear that sentiment has fully recovered from the COVID recession.”

Westpac expects RBA to lower its unemployment forecast a raise growth forecasts at its February meeting. Also, “markets will be watching the RBA’s approach to its yield curve control policy. By 2022, if the near term forecast is for the unemployment rate to be returning to near pre COVID levels, it will be difficult to justify forward guidance that the cash rate will remain on hold for a further three years.”

New Zealand manufacturing sales rose 3.1% yoy in Q3 in volume terms. Eight of the 13 manufacturing industries had higher sales volumes comparing to a year ago. “In June these industries were heavily impacted by COVID-19, however, in September, levels have rebounded and are in fact higher than any other September quarter on record,” business insights manager Sue Chapman said. “This could be due to a rise in demand and more stability in these industries.” 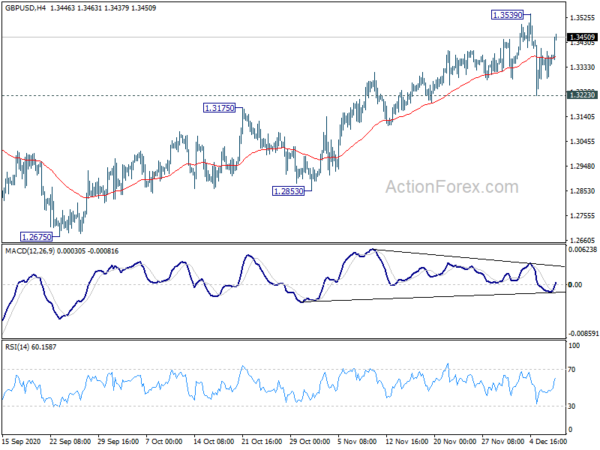 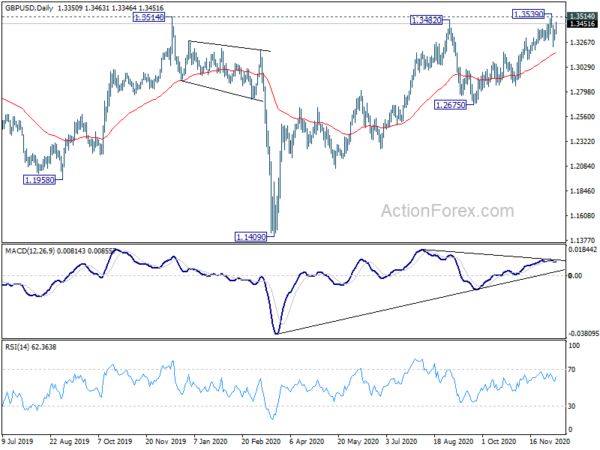