Sterling softens notably today as focus turns to BoE rate decision, and more importantly the stance regarding negative interest rates. Euro and Swiss Franc remain generally weak too. New Zealand and Canadian Dollars are paring some gains as risk markets turned mixed again. But Aussie is somewhat bucking the trend with a rebound. Dollar buying is picking up in Asian session, and there is some upside prospects, depending on tomorrow’s non-farm payroll report.

Technically, GBP/USD’s break of 1.3608 minor support is a sign of weakness in the Pound. some focuses will be on 141.16 support in GBP/JPY and 0.8917 resistance in EUR/GBP. These two levels are still far from the current prices. But they could be vulnerable should selling in Sterling intensifies.

According to Alan Oster, NAB Group Chief Economist “like many other indicators the survey shows that the economy continued to rebound strongly late in Q4. Optimism in the business sector continued to strengthen as the impacts of severe lockdowns faded”.

“What is even more encouraging is the fact that businesses have seen a strong rebound in actual conditions – particularly in trading conditions and profitability. This likely reflects the huge support provided to the economy by policy makers” said Oster.

Also released, trade surplus widened to AUD 6.79B in December, missed expectation of AUD 9.0B.

New Zealand ANZ Business Confidence rose to 11.8 in February’s preliminary reading, up from December’s 9.4. Own activity outlook rose to 22.3, up from 21.7. Looking at some more details, employment intensions rose to 10.6, up from8.8. Investment intentions improved notably to 17.8, up from 8.56. But export intensions dropped to 6.3, down from 10.3.

ANZ said: “We are forecasting wobble in demand in the first few months of this year as the true cost of the closed border for the tourism industry starts to become apparent. But it’s fair to say there’s not much sign of it yet, with the roaring housing and construction sectors filling the void, albeit fuelled by credit rather than foreign exchange earnings. Further monetary stimulus is looking less necessary by the week, and we no longer expect any more OCR cuts this cycle.”

Fed Bullard expects very strong GDP growth for all of 2021

In a presentation, St. Louis Fed President James Bullard said the health crisis will “wane in the months ahead” with early arrival of vaccines. “Macroeconomic forecasts suggest very strong U.S. real GDP growth for all of 2021,” he said, even though “downside risk remains”.

“Employment has rebounded more rapidly than expected”, he added. “Labor market recovery is about four years ahead of where it was following the 2007-09 recession”. Official unemployment rate could decline to as low as 4.8% in the months ahead.

Nevertheless, Bullard later added that “we’re still in the middle of a crisis, so it’s too early to initiate that discussion” about scaling back asset purchases.

Fed Evans: Inflation won’t be back to target until mid-2020s

In speech, Chicago Fed President Charles Evans said he expected the US economy to growth in the range of 5-6% this year, and then moderate in 2022 and 2023 to 2-3% range. Unemployment rate would improve to pre-pandemic level of 3.5% by the end of 2023. However, underlying inflation “won’t be back to our goal until the mid-2020s”.

The near-term inflation outlook is “complex”. Supply constraints and price pressures are seen in “very strong” sectors but not the weak ones. Evans expected “some higher top-line inflation numbers” in the Spring due to temporary constraints. But after these factors “have run their course”, inflation will “settle down and end the year in the range of 1-1/2 to 1-3/4 percent.”

“When I think about my economic forecast, I am reasonably confident that we will reach our maximum employment goal over the next three years,” he added. “I am more concerned about the prospects for reaching our inflation mandate, however. Inflation is far too low today. And we have a long way to go to reach the magnitude of overshooting that I see as necessary to satisfy our average inflation objective.”

BoC Schembri: We might be willing to tolerate a small overshoot in inflation

BoC Deputy Governor Lawrence Schembri said that Fed’s adoption of a more dovish policy framework last week could in the end benefit the Canadian Economy. The central bank is also considering to allow an inflation overshoot like the Fed does.

“Our models show that despite an appreciation of the (Canadian) dollar that might result from the Fed lowering interest rates, on net we’re better off because there’s more activity and more demand for Canadian exports,”he said.”

“Maybe there’s an opportunity to overshoot the target a little bit or tolerate an overshoot if we want to be aggressive in reducing the risk of being at the effective lower bound,” Schembri said. “We might be willing to tolerate a small overshoot or, like the Fed has done, actually aim for an overshoot. And that’s a question we are pondering right now.”

BoE to stand pat and discuss negative rates, some previews

BoE is widely expected to keep monetary policy unchanged today, with Bank rate held at 0.1% and asset purchase target at GBP 895B. New economic projections will also be released. But the major focus will be on rhetorics regarding negative interest rates.

Governor Andrew Bailey has recently noted that it might be premature to implement negative rates. For instance he suggested that there are “lots of issues” with negative rates and policymakers have “not actually discussed” the issue yet. Chief Economist Andy Haldane expected the economy to recover at “a rate of knots” from Q2. Brexit risks were also cleared. The hurdle for the divided committee to reach a consensus on using negative rates seem too high.

Here are some BoE previews:

GBP/USD’s break of 1.3608 minor support suggests that deeper correction is underway. Intraday bias is turned back to the downside for channel support (now at 1.3481). Strong support is expected there to contain downside to bring up trend resumption. Above 1.3682 minor resistance will turn bias to the upside to bring retest of 1.3758 resistance. However, sustained break of the channel support will argue that it’s already correcting whole up trend 1.1409. Near term outlook will be turned bearish for deeper fall. 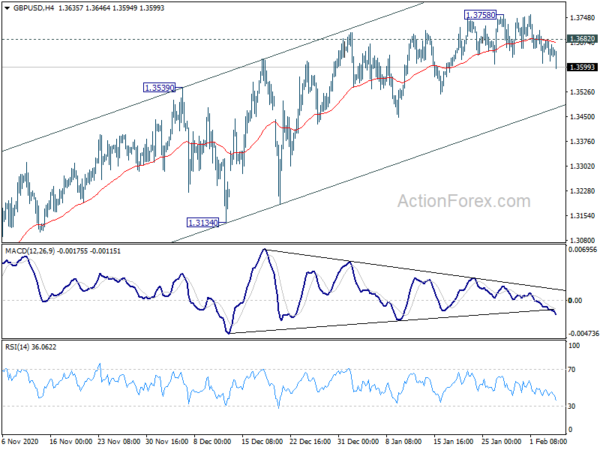 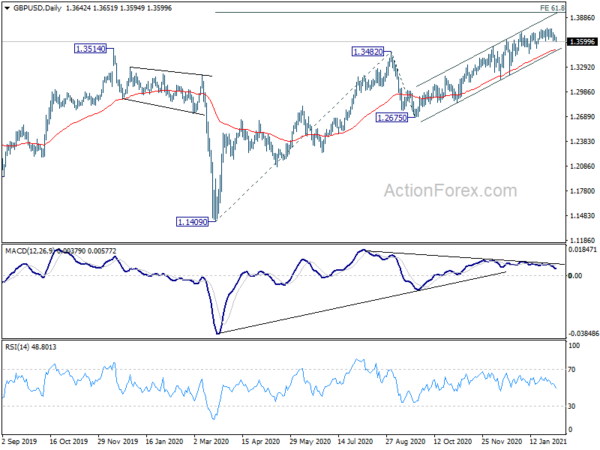