Yen and Dollar are generally softer today as markets open December on firm footing. Australia Dollar is following as third weakest as diplomatic tension with China worsens. On the other hand, Euro is leading Swiss Franc higher. Manufacturing data from China and UK indicate sustainable recovery for now, while Eurozone PMIs were not too disastrous. Focus will turn to US ISM manufacturing.

ECB Schnabel: It’s appropriate to preserve financing conditions rather than ease much further

Regarding the upcoming policy recalibration, ECB Executive Board member Isabel Schnabel said it’s “appropriate to focus on preserving” the financing conditions, “rather than easing much further”. She emphasized, “if it’s necessary to do something that doesn’t meet market expectations, we have to do that nevertheless.”

“I indeed hope this will be the last big push (on monetary stimulus”, but we can never know what’s going to happen,” she said. “There is a positive scenario where we get a swift recovery and the scarring is relatively limited. But there is also the risk of the crisis being more protracted.”

She’s open to extending the PEPP window by 12 months to June 2021. On the topic of further rate cut, “there is no technical reason why this could not be lowered,” she said. “The question is whether this is considered appropriate.”

Eurozone PMI manufacturing finalized at 54.8, a brighter outlook indicated by upturn in optimism for year ahead

Eurozone PMI Manufacturing was finalized at 53.8 in November, down from October’s 54.8. Markit said there were slower, but still marked gains in output and new orders. Job losses continued but confidence improved further. Looking at some member states, Germany PMI Manufacturing stood high at 57.8. The Netherlands hit 22-month high at 54.4. However, Italy hit 5-monthlow at 51.5. Spain hit 5-month low at 49.8. France hit 6-month low at 49.6. Greece hit 6-month low at 42.3.

Chris Williamson, Chief Business Economist at IHS Markit said: “Eurozone manufacturing output continued to grow at a decent pace in November… The survey therefore adds to evidence that the region will avoid in the final quarter of the year a similar scale of downturn recorded in the second quarter.

“Encouragingly, a brighter outlook is indicated by the upturn in optimism for the year ahead, suggesting that the upturn should gather strength again in the coming months as lockdown measures ease and spending, especially investment, picks up in response to the recent news on vaccine development.”

UK PMI Manufacturing was finalized at 55.6 in November, up from October’s 53.7. It’s also a 35-month high, and an expansion reading for six successive months. Markit noted that “Brexit buying” leads to higher purchasing, stocks and exports.

Rob Dobson, Director at IHS Markit: “Growth of the UK manufacturing sector picked up in November, temporarily boosted by ‘Brexit-buying’ among clients and the ongoing boost from economies re-opening following lockdowns earlier in the year…. Whether the upturn of manufacturing production can be sustained into the new year is therefore highly uncertain, especially once the temporary boosts from Brexit purchasing and stockbuilding wane.

“On this front some reassurance is provided by the survey’s gauge of business optimism. Confidence has risen to a level not seen since late-2014, with over three fifths of manufacturers (61%) still expecting to raise output over the coming year. On the other hand, many manufacturers remain very concerned about the outlook and generally reluctant to expand capacity, hence employment fell for the tenth month in a row.”

RBA left monetary policy unchanged as widely expected. Cash rate target and 3-year AGS yield target are kept at 0.10%. The parameters and term funding facility and government bond purchases were maintained too. It continued to expect no increase in cash rate for “at least 3 years”. Bond purchase size will continue to be under review. The Board is “prepared to do more if necessary”.

Regarding the economy, RBA said “recent data have generally been better than expected… but the recovery is still expected to be uneven and drawn out and it remains dependent on significant policy support”. GDP would not reach pre-pandemic level until the end of 2021. While employment growth was strong in October, further rise in unemployment is still expected. Inflation is expected to remain subdued till 2022.

Ai Group Chief Executive Innes Willox said: “The manufacturing sector was broadly stable in November after a return to positive territory in October… Encouragingly, both new orders and employment continued to grow in November, pointing to the prospect of a continuing recovery as we head towards the end of the year”.

Also released, building permits rose 3.8% mom in October, above expectation of -3.0% mom decline. current account surplus narrowed to AUD 10.0B in Q3, larger than expectation of AUD 7.1B.

Usamah Bhatti, Economist at IHS Markit, said: “Concern remains that weaknesses caused by the COVID-19 pandemic persisted as both output and new orders both fell for the twenty-third month in a row. Furthermore, infection rates have surged in both domestic and international markets which resulted in a renewed fall in export orders, which dampened confidence further.

“However, Japanese manufacturers continue to report a positive outlook beyond the immediate concerns surrounding the sector. Around 33% of survey respondents foresee a rise in output over the coming year amid hopes that the pandemic dissipates and a robust economic recovery. Currently, IHS Markit expects industrial production to grow 7.3% in 2021 although this is from a lower base and does not fully recover the output lost to the pandemic.”

China Caixin PMI manufacturing rose to 54.9, highest in a decade

China Caixin PMI Manufacturing rose to 54.9 in November, up from 53.6, above expectation of 53.6. That’s also the strongest reading since November 2010. The sector improved for the seven straight months, indicating a sustained and strong recovery. Markit also noted that both output and new orders increased at the fastest rates for 10 years. Employment expanded at quickest pace since May 2011.

Wang Zhe, Senior Economist at Caixin Insight Group said: “We expect the economic recovery in the post-epidemic era to continue for several months. At the same time, deciding how to gradually withdraw the easing policies launched during the epidemic will require careful planning as uncertainties still exist inside and outside China.” 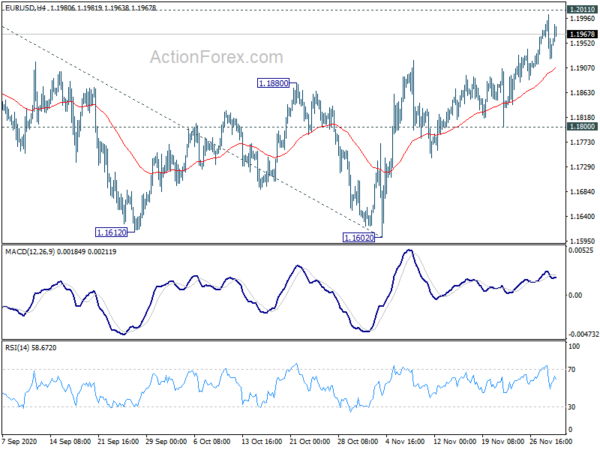 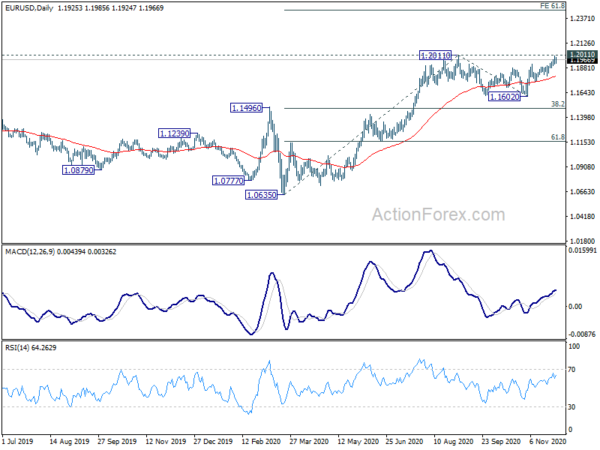